Younger Americans are reading more than I thought! 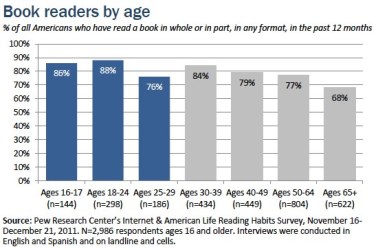 My favorite research organization, the Pew Research Center, has come out with a new study showing the reading habits and library use of younger Americans aged 16-29. I was pleasantly surprised to see that older teens and young adults are reading more than I thought! A whopping 83% have read a book in the past year. Let me guess how many of them read The Hunger Games….

Older teens (ages 16-17) in particular are very interested in reading e-books on e-reader devices like the Kindle or NOOK. More than 50% of these teens who have not read an e-book don’t even know that they can borrow e-books from their public library. This is something I hear often from adults — “I had no idea I could get e-books here for free!” — but I don’t hear about from teens. In fact, I don’t hear much from my library’s teens about e-books at all, so I’m curious if they are as interested as the report says and they just aren’t vocal about it.

The report states that “some 58% of those under age 30 who do not currently borrow e-books from libraries say they would be “very” or “somewhat” likely to borrow pre-loaded e-readers if their library offered that service.” I was just thinking about this concept of pre-loaded e-readers the other day. In Lafayette Hill, PA, the William Jeanes Library has 12 NOOKs pre-loaded with books that they loan out. I would love to find out how they financed this and how its working so far. It could be a big hit here at my library too.

So why, then, are some teens drawn to the idea of e-books and e-readers? It could be the idea of not having to lug around yet another book in their bags, what with all the textbooks and such they carry around at school all day. But there’s something inevitably cool and futuristic about an e-reader device (or any tech device that fits nicely in your hands, for that matter.) Who wouldn’t want to try it out? If you can’t buy an iPad or other tablet, the next best thing is an e-reader, which seems to be morphing more into tablets lately anyway. I also wonder if teens want to give e-readers a shot because they secretly like reading but wouldn’t be caught dead in public with a print book in their hands. Like a print book says “I’m a nerd” but an e-reader says “I’m trendy.” This is just speculation but I’m willing to bet a few teens think of it this way.

I’m going to ask my Teen Advisory Board about it, get their opinions, see if they are even interested in e-books at all. The TAB has started off very well, by the way, with our first meeting having 13 members! And they had excellent ideas for the library. I noticed I was talking too much at the beginning and steered the conversation so that they would be running the show. What a great bunch of teens! I’m really pumped to keep the meetings going and start putting their ideas into action.

This week’s New York Times Book Review features two articles — “Dead Again” & “It’s Alive” — about the possible demise or longevity of the printed book. Authors Price and Silverman pepper their separate arguments with predictions and descriptions made hundreds of years ago — my favorite of which includes a future where no one walks to the public library anymore; there’s an airplane drop-off service.

Silverman quotes Thoreau to make the distinction between books and other forms of art that can connect us with humanity: “[The book] is the work of art nearest to life itself. It may be translated into every language, and not only be read but actually breathed from all human lips; — not be represented on canvas or in marble only, but be carved out of the breath of life itself.”

Words on a page may not be as striking to look at as a painting like Munch’s The Scream, but a book can produce just as much, if not more, emotional stimulation and connection with life as we experience it everyday. Some have argued that film would take the place of books as the primary storytelling medium. And yet, more and more films are based on stories told in books first (The Help, The Bourne Legacy, The Hunger Games). Films are indebted to books; they would never replace them entirely.

What about e-readers & e-books overtaking the printed book? Again, the electronic version of books are indebted to the printed version. The e-readers simulate the turning of a page. One mimics the other. Trains did not disappear when planes were invented; you still “board” both. Farms didn’t disappear when scientists learned how to make food entirely in a lab. Sure, MP3s have trumped CDs, which have trumped tape cassettes, but music has no replacement. The format is not the issue; it’s the medium that matters.

The Rise (or lack thereof) of E-reading

Pew Internet Report on the rise of e-reading – http://libraries.pewinternet.org/2012/04/04/the-rise-of-e-reading/

In February, 21% of Americans said they have read an e-book in the past year. When expanded to include other long-form content “such as magazines, journals, and news articles in digital format on an e-book reader, tablet computer, regular computer, or cell phone,” the percentage of people jumps to 43%.

The 2011 holiday season saw a spike in the number of e-readers and tablet computers sold. Will this become the new tech toy trend for the next 5-10 years? I have a feeling that tablet computers, like Apple’s iPad, will be a more popular item to own than a simple e-reader device because of their ability to do more than download books to read. But Amazon’s Kindle Fire, with the capacity to view video and listen to music, may be a better alternative for those who don’t want to spend a lot of time learning how to use an iPad, or don’t want to spend lots of money either.

Another thing to note–those who read e-books also read more in general than those who haven’t read an e-book in the past year. E-books readers have read 24 books on average per year, in all kinds of formats.  People who don’t read e-books read an average of 15 books per year. The demographics of avid book reader tend toward women, whites, the well-educated, and those 65 years or older.

Looking at these demographics, I have to wonder. Are e-readers trending towards retirees? Is reading an activity that is mostly enjoyed by people with lots of free time on their hands? If you are a full-time working mother, reading is probably low down on your list of activities, just behind getting more sleep.

When people start saying that print books will soon be obsolete and everything will be read on a screen, I think of the handful of times I’ve personally read a book, whether on a computer screen or an e-reader. I didn’t enjoy it the way I enjoy reading a physical book, my eyes would strain and I would get tired quickly, my mind would inevitably wander off and my mouse would take me to Facebook or down another trail, or I would miss the feel of pages between my fingers and the ease of seeing exactly how far I had to go to get to the juicy ending. That progress bar at the bottom of the e-reader screen just doesn’t do it for me. Not to mention, the e-readers are sometimes hard to use and harder to download books onto. When it comes to print books, I only have to reach out and grab it.

Still, I will keep reading reports about e-readers and e-books. I will watch how the trends change and the new developments in technology that arise. But I will remain skeptical that e-readers and e-books will replace every single book in the entire UNIVERSE. My prediction? Give it another 500 years.