Great advice while working with teens

School librarian K.C. Boyd was featured in November’s School Library Journal article, “A Leader for Readers.” She ended her wonderful article with a list of advice from her father that has carried her through her career. Boyd has “experienced more failures than successes.” For this reason, I value her perspective of the job and the challenges and joys it has to offer.

Know your subject matter Do your research, read the books, and practice using the social media pages prior to introducing them to students.

Have respect It’s a two-way street with today’s kids. When they observe that you are making an effort to respect them, they will be more cooperative.

Listen Students will provide you with the blueprint for any program you are trying to implement.

Have patience If it doesn’t work, try, try again.

Keep a sense of humor Laugh at yourself, make those mistakes with the students, and just keep laughing. 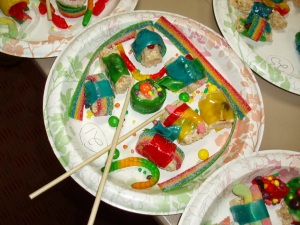 All the colors of the rainbow

We had a great program the other night for teens and tweens at my library: CANDY SUSHI! It was so cool to watch everyone come up with different designs for their sushi. We put out lots of candy, I mean LOTS. The ingredients were:

Just like the show “Iron Chef,” we also had a secret ingredient which was candied melon strips. Everyone constructed their sushi for about 40 minutes. Then they all put their plates up at the main table and voted on Most Colorful, Most Authentic, and Best in Show. The plates were numbered to keep things simple and anonymous. The winner received chopsticks, origami paper, and a Japanese snack. Best in Show got some dried fish snack too! (A gag gift but still fun!)

All the pictures from the program are up on Abington Free Library’s Picasa site here. I would definitely do this program again. It would be great for all ages, not just tweens and teens, but also families with younger children as well.

Total YA books I’ve looked at this year 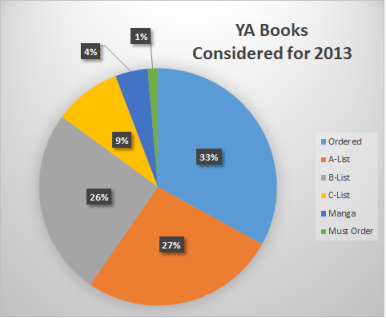 To go along with my previous post about book budgets, I decided to count up all the books I considered buying for the YA collection this year. I usually read the following book review magazines for YA reviews: School Library Journal, VOYA, Booklist, Publisher’s Weekly, and New York Times Book Review. But I also depend on the reviews that appear on my book vendor’s website which includes Kirkus Reviews (I use Ingram’s iPage). I find myself usually siding with what Kirkus and VOYA have to say.

This list gives you an idea of how many books I’ve considered this year for YA. And most of these books have multiple reviews that I have to read and evaluate, including lots of books that have both rave reviews and horrible reviews.

Total YA books ordered: 336 or 33% of the books considered

Number of YA books still on my A-list that I haven’t ordered: 271 or 26% of books considered (a small percentage of these books have a 2014 release date)

Number of books on my C-list (bad reviews): 93 or 9% of books considered

Number of Manga still on my A-list that I haven’t ordered: 45

Number of book on my MUST-ORDER list: 14 (these are still to-be-published but they are on my radar)

Wow, this puts into perspective how much work I did this year for collection development in YA. I read reviews for over 1,000 books, and with each books getting 2 or more reviews, that’s over 2,000 reviews that I’ve read this year. I’m exhausted looking at this number. It would be interesting to do this again for 2014 and compare.

For those of you wondering how I get my numbers: for every book I consider, I add it to some kind of list, either MUST ORDER, A, B, or C-list. This helps me keep track of what I’ve already looked at so I’m not duplicating my work and looking at books several times. If I see it’s already on a list, I move on to the next book review.

2013 is almost over. It’s been a great year at Abington Free Library. Here’s what I’m most proud of this year.

The Teen Advisory Board at the library suggested that we start a book club this year. It’s been pretty popular so far. Every time we host a book club, the first 10 teens to sign up get a free copy of the book. These free copies were purchased with money donated by the Friends of Abington Libraries and I’m so grateful!

April – Divergent by Veronica Roth – Most popular with 22 teens attending!

June – The Name of the Star by Maureen Johnson

August – Everybody Sees the Ants by A.S. King – The author graced us with a visit, answered questions, and signed books. She is a rad lady. You should follow her on twitter: @ AS_King

We will continue the Teen Book Club in 2014. The first book of the year will be Clockwork Angel by Cassandra Clare. 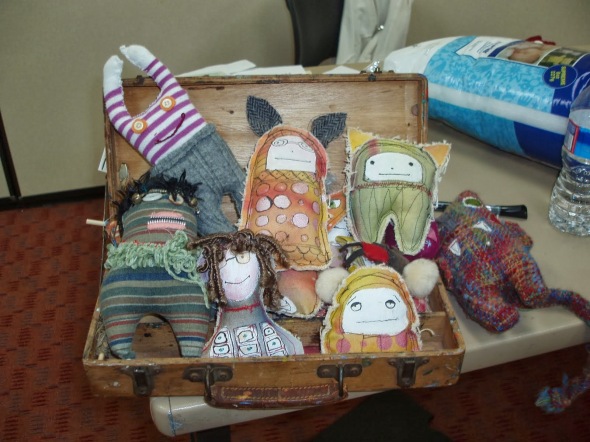 From the Japanese mascot program on November 4 , 2013 at Abington Free Library

My picks from YALSA’s 2012 Best Fiction for Young Adults

I know it’s a little late in the year to be posting about last year’s books but I’m gonna do it anyway!

I read several books on YALSA’s Best Fiction for Young Adults list for 2012. Here are the ones I absolutely loved:

These books I also liked but didn’t quite blow me away like the first 3 did:

I started these books but never finished (usually because some other book was screaming “Read me NOW!):

Wish me luck in getting around to the rest of these books! 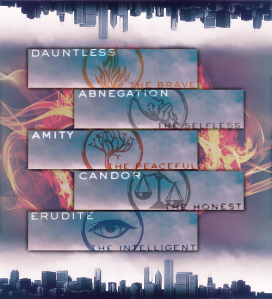 Lindsay Cummings
Create a free website or blog at WordPress.com.