Protect yourself from Identity Theft

This Little Pony is angry because her identity was stolen

This morning, a patron called wanting to know how to protect his identity from being stolen by hackers on the Internet. He mentioned a service that could protect you through the use of one password. I wasn’t aware of a service like that but a quick online search will show you that they do exist. Lifelock is one such website.

But should you have to pay that much to be protected from hackers stealing your identity? I don’t think so. There are free alternatives that anyone can use and everyone should know about. Including me… As a librarian in the digital age, I must know this stuff like the back of my hand. It’s called financial literacy–just another form of literacy that libraries need to actively promote. The Public Library Association agrees.

“How to protect yourself from identity theft for free,” USA Today, Nov 9, 2012

And don’t forget the 3 credit reporting agencies (your new BFFs):

You’d think getting people books or information about animals would be easy. But it’s deceptively difficult. Here’s a few examples:

A woman and her teenaged son came in asking for a book on black panthers. I had to ask, “As in Black Panther Party or animal?” So animal it was. I thought black panthers were their own species of big cat. Looking through books turned up nothing. Then I checked the indexes of animal encyclopedias and still was confused. Where are the Black Panthers, YO? I finally found an entry that confused me even more. It said that black panthers were really black leopards or black jaguars. It wasn’t until I read the Wikipedia article on black panthers that I got the gist of it. They aren’t their own species. It’s just what we call a big cat that has a gene which causes its fur to be black from excess melanin. They sometimes still have spots like their jaguar or leopard mommies and daddies. So “black panther” is more of a nickname than a real scientific classification.

AWWW! So cute! But when one is living under your porch and eating all your plants and vegetables and you are pulling your hair out trying to make it scram, then you come to the library for answers. “What do groundhogs eat,” she wants to know, “because we’re gonna try to trap him.” Again, I can’t find any books on groundhogs on the shelf, and the encyclopedia index says “SEE woodchuck”. So they are called woodchucks, whistle-pigs, land-beavers. They are part of the marmot family and they love to eat fruits and veggies and other green things. (How is this guy so fat?) The best answer I got, including techniques on how to trap one, was from the Internet. I avoided the Internet at first because she said she wanted a book. But she was happy with the information anyway. Good luck to her! I hope the groundhog didn’t ruin the foundation of her home! (Something else I learned they are capable of…)

I feel sad to even put this guy on the same page with that cute groundhog… But a boy was doing a report on the pill bug and needed to use at least 2 books for writing his report. It’s nice to know that some teachers are still requiring books to be used for research, not just the Internet. But again, is Pill Bug its “true” name? I was stumped by the books, and the Internet was also confusing. Did he want the pill bug aka woodlice aka Armadillidiidae (Arma-Dilla-Dee-Day-Ding-Dong)? Or was it really the pill millipede which looks very similar but has no other relation? I gave him the info on the woodlice variety, but geez, did it really have to be that hard?

Lessons learned? Do a quick online search before you hit the books, just to make sure if your animal of choice goes by another name or has any confusing varieties or is even really an animal! Then look it up in the books.

Why is the flag at half staff today? 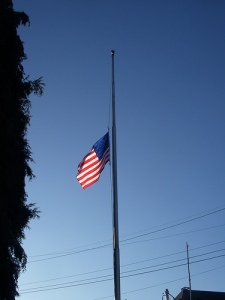 A patron asked why the American flag outside our building was at half staff today. I didn’t know off-hand but I guessed that it was for the victims of the Oak Creek, WI shooting. After doing a quick Internet search, I found a website, Half Staff American Flag Notifications, that can tell you why and when the flag is at half staff.
I’m surprised that the federal or state government doesn’t have a notification site for this. At least this site adds the official proclamation by the President so you know it’s official.

I cannot get enough of the fantastic tips mentioned in the “Cool Tools” column of School Library Journal. Written by Richard Byrne, he also has an excellent blog, Free Technology for Teachers. Here’s a few of my favorite posts from SLJ‘s “Cool Tools” column.

Unfortunately, the SLJ website doesn’t make it easy to find the “Cool Tools” column. What’s up with that, guys???

The Power of Google

I love this infographic about how to use search operators in Google to get the best results.  Some of these strategies I knew about; some I didn’t. The tilde (~) and asterisk (*) are my two new favorites.

Originally posted by Hack College under a Creative Commons license.

What an old atlas taught me

Going through my grandparents’ house, I found an old atlas from 1941. What a treasure! This was a volatile time for Europe and the maps clearly show it. Half of France and all of Belgium were shaded with the “occupied by Germany” color.

My boyfriend and I spent a lot of time last night pouring over the maps. To think in about 30 years, that atlas will be 100 years old. I would like to keep it in good condition, so I will have to research the best way to store it.

On the map of Europe, we were particularly interested in how the Eastern European nations differed from today. I mentioned Prague and the Czech Republic, but we couldn’t find the city. We weren’t even sure where on the map exactly the Czech Republic would be today. So I looked it up on the Internet, along with the history of the country. I had no idea about the Czech’s stormy past, being ruled by the Hapsburg Empire for 300 years, then forming an independent country only to be taken by Hitler, dealing with the Soviet Invasion, and finally pushing its way through the Velvet Revolution.

Looking at an old atlas really showed me how much I still have to learn about this world.