I held a Harry Potter Quizzo program last Wednesday for teens at my library. It was so much fun planning it, baking and buying goodies for it, writing the Quizzo questions, and watching the teens really enjoy themselves and have a great time.

Each Quizzo round was based on one of the Harry Potter books, so there were 7 rounds total with 8 questions and a bonus question each. I was rushing to fit in all the questions before our time was up! Some of the teens were Harry Potter fanatics so I really should have made the questions a lot harder than they were. These guys were so smart that they were catching me on technicalities – like the fact that in the fourth book, the person who brought Harry back to the castle after his battle with Voldemort could either be Mad Eye Moody or Barty Crouch Jr, since Barty was disguised as Mad Eye. I was floored by the things they remembered from the 4,224 pages that they read of the series. Never underestimate your teens! They will outsmart you every time.

Some other highlights from the program:

The newest issue of VOYA (Voice of Youth Advocates, Vol. 35, Iss. 3, Aug 2012) has a great article about the status of humor in YA fiction (“A Funny Thing Happened,” p. 16-18). Why doesn’t humor get more respect in the YA literary world? After all, a lot of teens might want to read something that will make them laugh rather than sob hysterically. And yet, if your main character doesn’t have cancer, or isn’t trying to survive a deadly reality competition, or doesn’t have a life-threatening addiction, then the book doesn’t get as much press or clout. Don’t get me wrong, I love these deep, intense books. But I also like when an author perfectly mixes humor with real-life problems. The Absolutely True Diary of a Part Time Indian by Sherman Alexie does this spectacularly.

I’ve noticed teens in my library who want to read something entertaining that will make them giggle, laugh, or ROFL. So I decided it would be a great time for a YA book display on the theme of humor. Here’s some of the books in our collection that I recommend to any teen that needs to laugh it up:

Here I am getting our teen volunteers signed in

I’ve been running a program this summer called Abington READS! It’s a buddy-reading program where we match teen volunteers with beginning readers (Grades K-2). They read picture books and easy readers together. Teens are encouraged to let the children read to them. This builds children’s confidence as they start learning one of life’s most important skills.

It’s a great way to keep up children’s reading skills over the summer. Teens also feel empowered as they inspire a new generation of readers. I’ve loved doing this program and look forward doing this year after year.

Visit our photo gallery to see Abington READS in action!

The Pew Internet & American Life Project calls Millennial teens “networked learners.”  Growing up in the digital age has altered the way they learn.  The report says that teens are (my notes in the indented bullets):

Taken from Evaluating Teen Services and Programs by Sarah Flowers 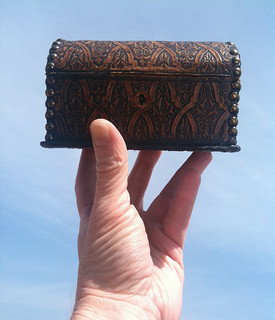 We have a geocache at the Abington Free Library!

I can’t claim credit for setting this up, though I wish I could. A patron who loves geocaching has incorporated the Library into his newest geocache.

Don’t know what geocaching is? It’s like a modern day treasure hunt with a GPS device. They can be very simple or extremely challenging to find. Check out the official Geocaching website to learn more and join the worldwide fun.

Our geocache can be found only after an elaborate puzzle is solved. I don’t want to link to the geocache puzzle because that would give everything away! You’ll have to stumble upon the challenge on your own.

We are so excited that a patron asked us to be involved in his geocache. I see this as an excellent opportunity to get more people into the library, especially those who have never set foot in this building before. I recently read an article in an issue of YALS (Young Adult Library Services) about geocaching — I had never heard of it before. Then this stumbled into my lap and luckily I knew a thing or two about it.

I have spent a lot of my time in my first month staffing the reference desk and working on developing the YA collection. Ordering books is a thrill! I love when the new titles come in and then immediately go out to a waiting reader.

I’ve set up an art program for tweens this summer (grades 5-8) through the ACPPA. They will be learning how to make a Pop Art Portrait in the style of Andy Warhol. Our summer annual Abington Reads! program is gearing up too. We have flyers printed out ready to be distributed to local schools calling for kids and teens to participate. It’s a buddy reading program in which teens help new readers build their skills and confident by reading books aloud together.

I have some ideas for new programs that I’d like to start planning. Hopefully fall will be a very full time for YA programming!

Talking to Teens in the Library

Tonight, I walked up to 2 teens that were working on a project in the library. It was surprisingly easy to do. I guess I have a natural ability to talk to strangers, but I didn’t know how the teens would react to my presence.

I sauntered over and started by asking what they were working on. That’s usually a good introduction and you can expand on the conversation from there. Luckily, these teens weren’t shy and they wanted to talk about how their teacher gave this assignment on spring break, and how it was due yesterday but they got an extension, and how boring it was, and then, OH! my dad’s house just burned down but that’s okay because all my stuff is gonna get replaced and I got to stay in a hotel with a pool and I thought my library book was in the fire, but it wasn’t, it was in my locker… and you get the idea.

Once they started, they didn’t want to stop! Great! They liked me enough to talk to me about all kinds of things. I think it has something to do with they way I look and how old I may seem, like I’m a college student. The biggest clue that they were comfortable with me was telling me that they thoughts their assignment was boring. Once they said that, I was in. I wasn’t an Authority Figure in their eyes. I was a relatable person who could empathize with their situation. Yes, girls. Homework can be totally boring, don’t I know it.

I also was able to steer the conversation towards books. I asked if they read The Hunger Games because who hasn’t yet? They actually hadn’t read them but want to. I suggested a different series called the Uglies by Scott Wersterfeld which piqued their interest. Later on, I swooped by YA and took a copy of the first book off the shelf, giving it to the one teen who was still hanging around. What a great way to get books directly into teens’ hands!

This gives me the courage to approach more teenagers when I see them in the library.